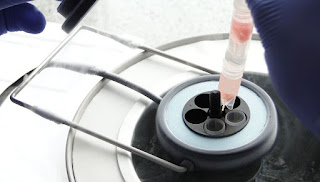 In a medical first, a woman has given birth to a healthy baby boy from a transplant of her own frozen ovarian tissue preserved when she was just 13-years-old. It's a remarkable breakthrough that's poised to benefit young people who lose their fertility because of cancer treatments.
As reported in The Telegraph, the unnamed 28-year-old woman, who suffers from sickle-cell anemia, had to have her ovary tissue surgically removed prior to chemotherapy. She was only 13-years-old at the time and had never experienced menstruation, but the doctors had the sense to cryopreserve her ovarian tissue (specifically her right ovary and dozens of tissue fragments) with the hopes that it could be used to restore her fertility in the future — which, as a new study published in Human Reproduction point out, is exactly what happened.
Read more at io9.
Posted by George at 7/01/2015